Our colleagues in swift-conservation.org have alerted us to a small piece in The Guardian https://www.theguardian.com/environment/2019/aug/12/country-diary-swifts-band-together-for-screaming-parties.  Nothing new, but always good to see swifts getting a profile - increasingly so.
10 August 2019

One of our members has drawn our attention to a lovely article, 'Consider the Swift' by Katherine Rundell, in the London Review of Books.  You can access this at https://www.lrb.co.uk/v41/n16/katherine-rundell/consider-the-swift if you sign up to read up to four articles a month in the LRB - sounds like a good offer.
4 August 2019 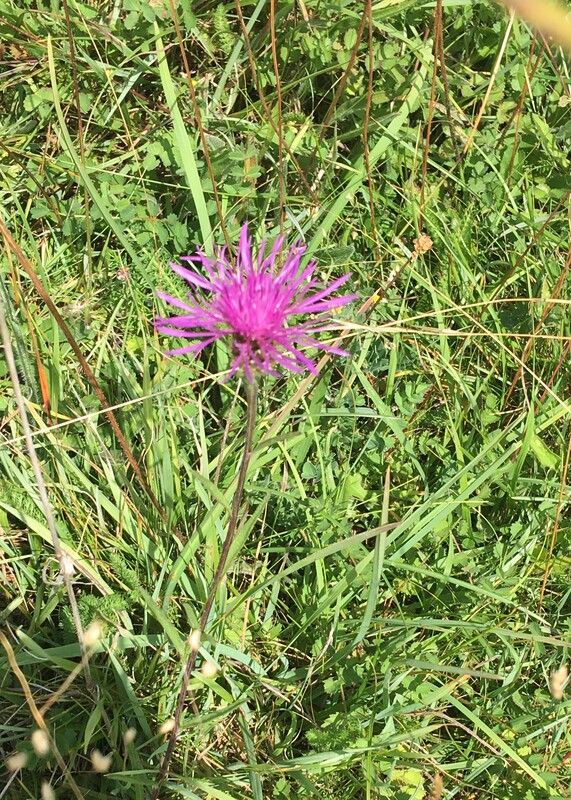 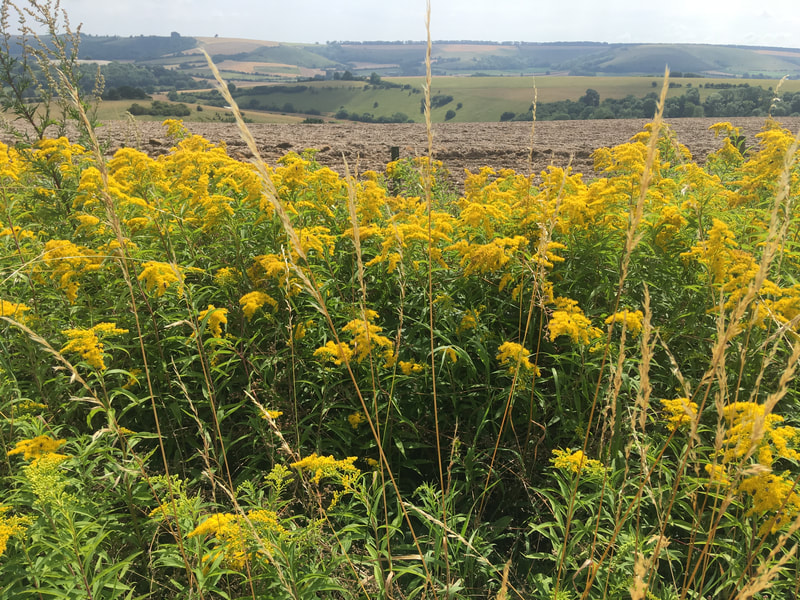 Golden rod on the Shaftesbury Way 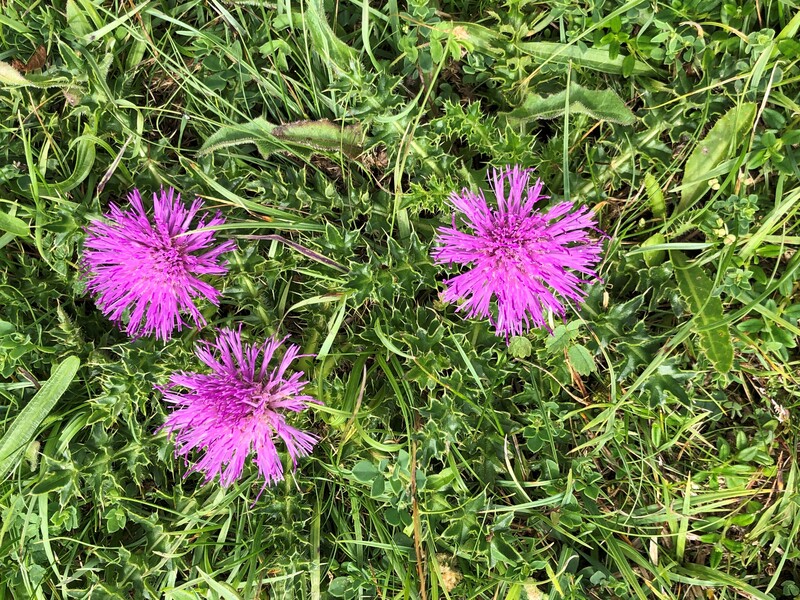 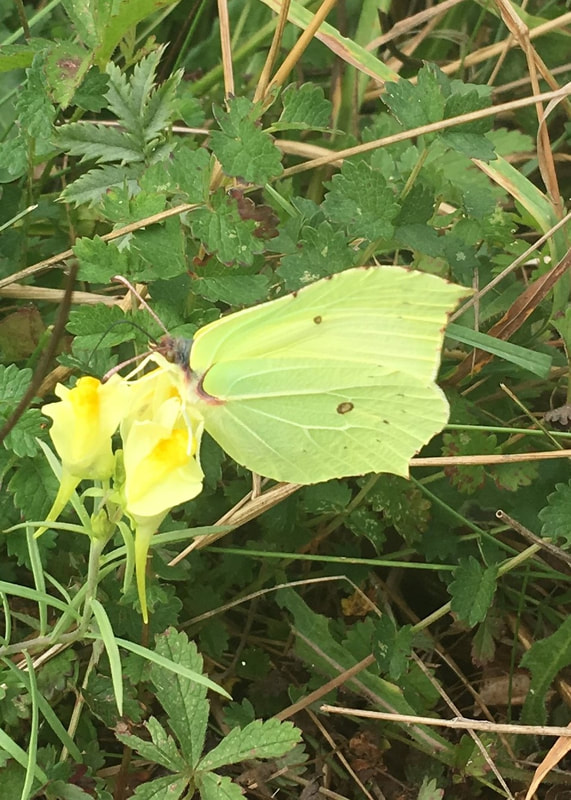 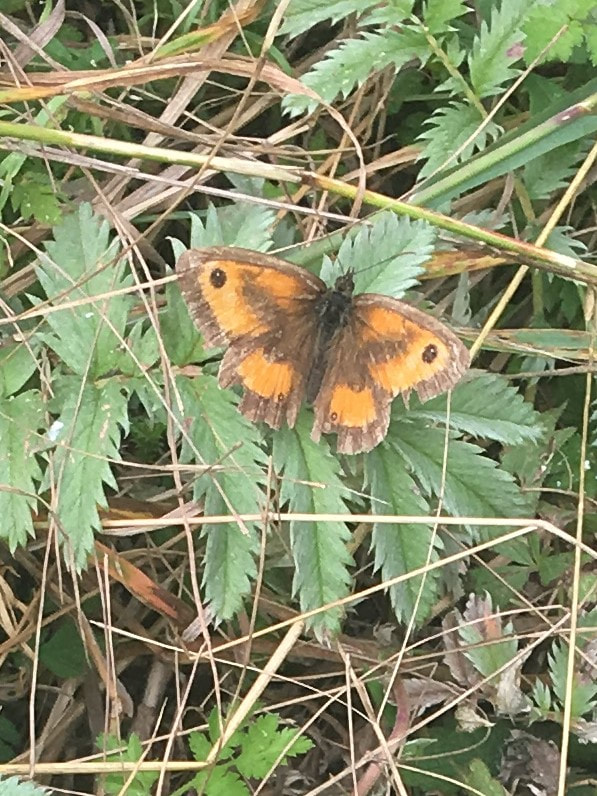 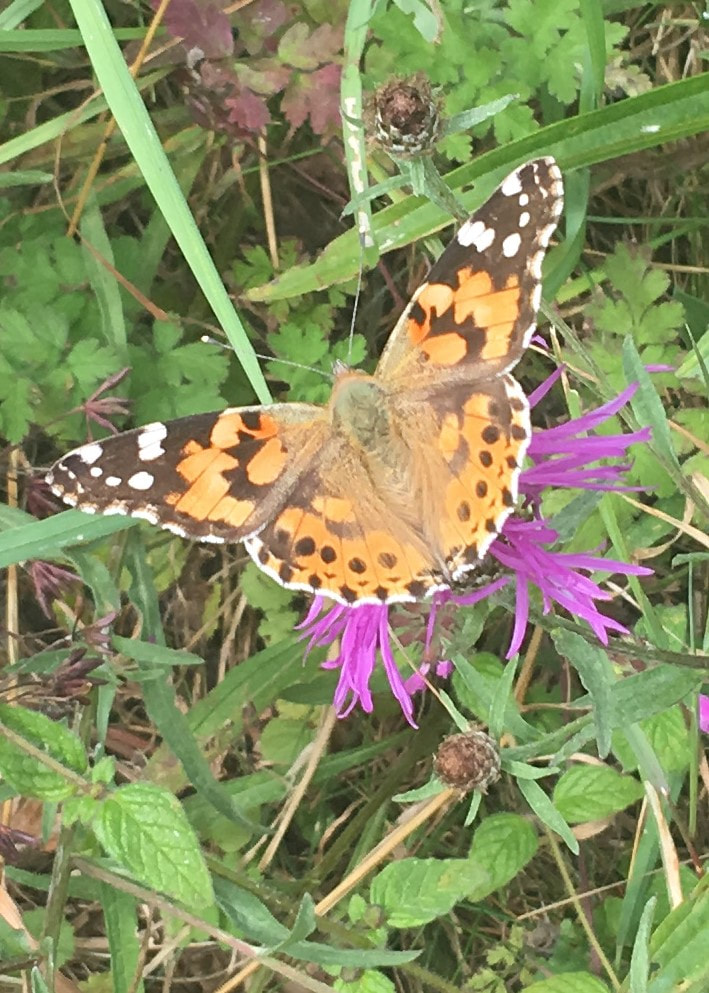 Painted lady
A member writes:  I had a wonderful walk from Berwick St John across to Norrington, then up the easterly of the two tracks from there onto the Shaftesbury Way.  The flowers at the top of the track were really beautiful - knapweed, toadflax, scabious, yarrow - attracting some butterflies but maybe disappointingly few.  There's an amazing clump of golden rod on the Shaftesbury Way - legitimately a wild flower (solidago) but this looks so luxuriant it's surely a garden escapee.
​ 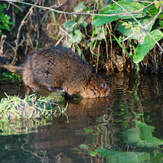 9 May 2019
Mr Ratty caught on camera
This gorgeous photo of Wind in the Willows hero Mr Ratty was taken on the Nadder, below The Avenue.
23 April 2019
Oysters Coppice

With the Big Garden Birdwatch count just finished, this piece from a member is especially relevant:

During the recent cold and snowy spell, the birds have been very grateful for any food left out in our gardens.  Fallen apples prove very attractive to several species and rail travellers may have noticed the blackbirds and fieldfares feeding on the fallers beneath the apple tree at the east end of the station platform.

Collecting and storing fallen apples in autumn means that through the winter you can stick them on the ends of twigs in garden bushes or hedges which makes them easy to access for those birds that will normally avoid ground feeding.

​They are proving particularly attractive to overwintering blackcaps. These neat grey birds, with a black (male) or chestnut (female) cap, are the size of a goldfinch and worth looking out for, if you feed your garden birds. They are far easier to see now amongst the bare branches than in the spring, when they are more often heard than seen as they sing hidden in the foliage. I have a pair of blackcaps that are regulars in my garden this winter, though the male is dominant. Indeed, on some days I had noticed that very little food was being taken from the feeder. I then saw the male sitting in the nearby hedge, and every time another bird attempted to visit the feeder, he flew out and shooed them off.  He seemed to do this for hours on end for a couple of days, but has now reverted to a more collaborative approach. Perhaps he was just being so protective while it was really cold.​
28 November 2018
Update on Elm trees and the White-letter Hairstreak

Peter Shallcross reports:  'The imported hybrids and Field Elms that formed the bulk of the 550 distributed last winter are unavailable this year.  Instead White Elm Ulmus laevis is flavour of the month. This is a native to France and Spain and north to Finland, inhabiting river valleys. Its resistance is due to the presence of antifeedant triterpene alnulin which is different from the resistance in most other resistant elms.

'I have obtained 100 whips grown from seed by a nursery in Gloucestershire. These are going to the Wylye Farmers cluster group and are going to be planted strategically throughout the valley to be of most benefit to the White-letter Hairstreak butterfly.

'Having exhausted this supply I am going to import white elms from Holland for the new Nadder and Sem farmer cluster group.  My longer term vision is to use micro- propagated tissue from plants imported last year to obtain much larger quantities and sell to some of the other 100 farmer groups.'

Chairman Peter Shallcross came across this 'interesting' larva at Boscombe Cutting this week.  Dr John Muggleton helped with the identification:

'The black slimy grub on hawthorn is the larva of a sawfly, known as the Pear and Cherry Slugworm (Caliroa cerasi).  It feeds on a number of rosaceous plants including hawthorn and, as the name suggests, pear and cherry.  There are three generations a year and the larvae found at this time of the year overwinter in the soil before pupating in the Spring.  They exude the slimy stuff as a form of protection - underneath is a normal sawfly larva.'
12 October 2018
Oysters Coppice and Semley Hill woods.
​Next Workday: Sunday 4th November 2018

Our volunteers had a new experience at our working day on 7th October.  They were tasked to do an initial survey of the ‘new’ ancient woods acquired by Wiltshire Wildlife Trust up Semley Hill.

These were bought for the Trust by some very  generous people of Semley and stretch for a mile to the North side of the road to Shaftesbury. They were originally given to the Arundell family by Queen Elizabeth I in 1572 and have remained with that family until now. They are on an extremely steep slope so not suitable for farming and have common rights which allow 10 landholders of Semley parish to access them.  Originally this would have been for livestock and probably rights to take fallen wood. These common rights still stand so it means the woods will never have permanent fences around them.

The Trust is also acquiring two areas of SSSI (site of special scientific interest).  One is Gutch Common itself, where there are dormice, and the other is the steep woodland up to Castle Rings, an Iron Age earthwork at the top of the hill which was later occupied by the Romans.  In all they will own over 100 acres of woodland including Oysters Coppice.

It is fortunate that we now have a large number of enthusiastic and knowledgeable volunteers to help manage these woods for the Trust.

On 7th October the group spread out and recorded mammal signs, notable trees, invasive species (none) and fly tipping.

On the positive side there was plenty of evidence of badgers and  foxes and even evidence of dormice in the hazel copse.  There were plenty of veteran and notable trees - mainly oak but also holly, beech and sycamore. There were many signs of old quarries which may have been worked by the Romans as they are below the old Castle Rings fort.  It would be interesting to get an archaeology survey done at some later time.

The negative side was a large amount of fly-tipping covering the area. This will have to be cleared to try and prevent further fly-tipping. There was also a sizeable ‘bivvy’ that had obviously been occupied during the summer and signs of mountain biking.

The Trust has also benefited from a generous grant from The Banister Charity towards the purchase of the two SSSI’s.  However they still have to raise £20,000 to cover legal and administrative costs so if anyone should feel passionate about protecting our special ancient woodlands look at the following link:

​This is a video kindly made by Ed Bersey a Trust member, to appeal for donations.

For further information on volunteering or about the new woods contact Andrew or Debbie on 01747  871311 or email Debcarter311@btinternet.com

Debbie Carter has sent us this photograph of an elegant White Tailed Sparrow, a frequent visitor to her fat-ball feeder.  Its friends don't seem to mind - perhaps they don't notice.

Please send in any photos that illustrate wildlife in the Tisbury area to tisnathist@gmail.com