Photo: Buff tip
This page will cover wildlife surveys sponsored by various organisations.  Before offering support, consider whether there may be any duplication or overlap with reporting you are doing elsewhere.  The date given is the date the item was posted.  If there is a terminal date for the survey, this will be included on this page.
8 September 2021
Our Nadder river: a favourite with bats 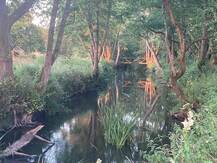 Photo: Dick Budden, Sunset on the Nadder 18 July 2021
We know from the survey undertaken last year further up the Nadder near Weaveland Farm (go to MoreNews and scroll down to 15 August 2020), that this area is phenomenally popular with bats.

Then, 5297 passes were recorded from a total of 10 identified species, over a month.

This year, Peter G  Thompson (who gave us our first Zoom talk last Autumn) placed a static bat monitor on one of the bridges over the Nadder in Dick Budden's patch for five nights in early July. It recorded 10,000 hits, i.e. 2,000 each night on average, with 13 different bat species = 75% of all the species resident in UK!  The species were:

The survey on this stretch of the Nadder is part of a programme Peter is working on to map the bat population along the Nadder from Tisbury all the way to Barford St Martin by the end of this summer.

Hopefully we’ll get him to share with us the results in due course. 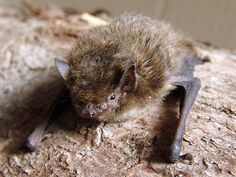 Pipistrellus nathusii Mnolf, CC BY-SA 3.0, via Wikimedia Commons
Meanwhile, these tiny creatures do sometimes live the most extraordinary lives.  The Guardian reported that a Nathusius's Pipistrelle (we have only the Common kind) weighting just 8g (I don't think my scales would even weigh that little), flew 1,200 miles - and ended up being killed by a cat.
​
Life isn't fair, for bats any more than it is for humans.
5 June 2020
Where do those scary wildlife stats come from?
​I asked Andrew Graham what brought him to set up his moth trap, which has given us the photos of those beautiful creatures.  In response, Andrew says:

'So much of what we know about our wildlife relies upon volunteers recording what they see in their gardens and local area. Combined with the sightings of numerous other recorders across the country, this gives scientists data with which to assess which species are declining or increasing in number. It will also show up how species respond to weather - for example a hot summer, or an especially cold or wet winter - as well as long-term trends like climate or land use change. I have been doing weekly counts of birds in my garden for several years now, and undertake butterfly recording at Tuckingmill and elsewhere in south west Wiltshire. It was natural to extend this to moths, although I could recognise relatively few of the day-flying ones.

'Just before lockdown, I saw that Butterfly Conservation, the wildlife charity that promotes the conservation of butterflies and moths, was promoting a relatively cheap and simple moth trap. Even better, they benefited through a donation from the vendor for each trap sold. I bought one and have been using it on appropriate nights since.  The bright light attracts the moths which hide in the box below it, sheltering beneath the egg boxes placed there until I come to open it in the morning. I only do it every few nights as it gives the moths a chance to feed and mate, and I go out and check the trap early in the morning so they are trapped for as short a time as possible.

'Very few were attracted to the light earlier in spring but as the nights have become a bit warmer there have been good numbers for me to sort through with my identification guides. I photograph them as that gives me the chance to really examine the markings and compare them with the guidebook without distressing the insect which can be released. There is a useful Wiltshire Butterflies and Moths Facebook group where people with much more expertise can give advice and help with identification. It's great to see and hear what people elsewhere are seeing, to get a picture of how the season is developing across the county and whether what we are seeing in and around Tisbury is representative of what is going on elsewhere.'
6 May 2019
The RSPB Swift Survey

The purpose of this survey is to record locations of swift nest sites around the UK. This information can then be used by local authority planners, architects, ecologists and developers to find out where swift hotspots are located around the country and therefore mitigate to protect breeding swifts during building development. This conservation planning tool plays an important role in reversing the decline of this charismatic migrant bird.
​
Please note, swift records submitted to the swift survey during previous years have been retained and are making a difference for swift conservation.
​12 April 2019
Some slugs are good slugs
The RHS is calling all gardeners! The beneficial Yellow Cellar Slug, which only eats dead material, is facing extinction due to the invasive Green Cellar Slug and they need your help (this is not 1 April!). Join the springtime slug hunt to help them understand how to encourage and protect these little creatures.  Go to the Cellar Slug Hunt web page for full information.
​9 April 2019
Watch out for..

Dog-walkers have proved to be effecive bird-spotters, too.  Over the years, they've provided valuable records, including a crane in the Railway Meadow, dippers in the Oddford and Fonthill Brooks, lesser spotted woodpecker at Billhay Bridge (between Pyt House and Semley), sedge warbler at Stubbles, golden plover and stonechat in various fields round the village,  mandarin duck with young  on the Nadder at Stubbles, merlin and hen harrier the concrete road.

All records go to the Wiltshire Bird Report.  Please keep them coming!
​25 January 2019
Watch out for -
Sadly, sick or dead hares.  Research by the University of East Anglia has found evidence that a deadly rabbit virus has spread to Brown Hares.  Since September, sick and dying hares have been reported in Dorset.  If you find a freshly dead hare that hasn't been road kill, or see a sickly one, please take a photo and email it to Dr Diana Bell at the University (D.Bell@uea.ac.uk) with the location (the app OS Locate will give you precise coordinates/lat&long).  If you are able to double bin-bag a corpse for them to collect and post mortem, it would be very helpful.